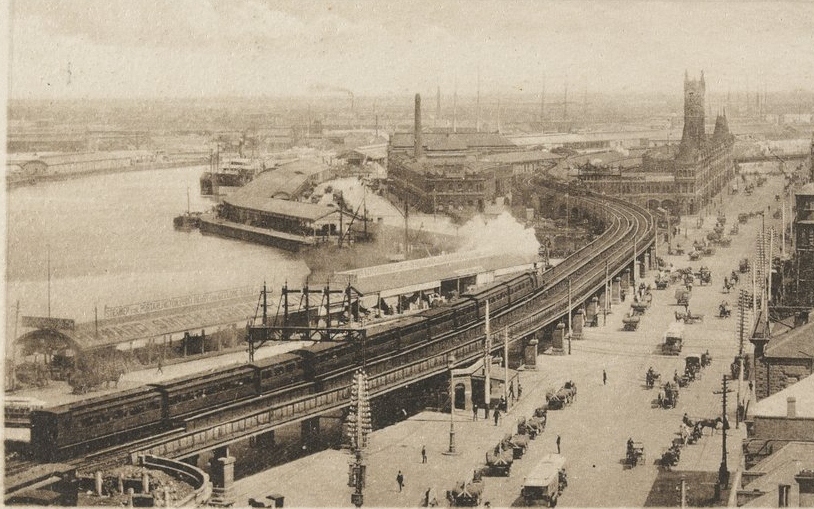 DISCOVER how the great journeys of exploration and the trade routes of the past impacted on Melbourne. This excursion in the Melbourne CBD is designed for both primary and secondary school students and visits key places using maps and images.
EXPLORE the buildings, landscapes, transport and streets in the historic maritime quarter of Melbourne by the Yarra River near the Aquarium, Immigration Museum (customs house) and railway. This can include key commercial buildings e.g Old Rialto, Winfield Wool Exchange,  Gothic Bank, stock exchange and Banana Alley. The trading barge Polly Woodside is also nearby.
LEARN the role of Melbourne as a trading site for the Kulin Nation and how settler trade impacted on their economy.
UNDERTAKE activities we can design at request to meet your students specific learning outcomes.

TRADERS: Melbourne was initially established in 1835 by two Tasmanian parties because of a globalised and lucrative trade in wool made possible by new technologies in shipping and later rail which dramatically expanded trade possibilities. The maritime quarter around today’s Immigration Museum was also  a major trading site for the the Kulin Nation including the local Boon wurrung and Woi wurrung clans . The wealth of Marvellous Melbourne derived from taxes on trade through the Port of Melbourne in the CBD  as well as the popularity of gold as a universal trading currency. The later development of the modern CBD was influenced by newer technologies for trade which shifted the focus away from the river. Trade was the impetus for founding the  Melbourne City Council  to administer the wholesale markets including several historic sites in this area.

EXPLORERS: The voyages of early explorers and their conclusions and maps played an essential role in Melbourne’s current location and it being one of the last modern cities in the world to be founded. The original motives of explorers in Australia were mainly military, scientific and agricultural. It wasn’t until trade became the prime motive that Melbourne was settled. Explorers such as Grimes, Flinders, Mitchell, Murray, Grant, Batman and Buckley played important roles. Melbourne’s Immigration policies since settlement are heavily influenced by perpetual shortage of trade labour.  We can also explore the voyages and occupations of these immigrants.
World explorers like Magellan and Vasco De Gama and others influenced Melbourne’s founding as they mapped the trade routes to both the Pacific and Indian Ocean (Oceania and Asia) which paved the way for the European exploration of Australia by later explorers such as  Dampier, Cook, Tasman, Flinders, etc.

See our other school programs and excursions including our Explorer Tour.