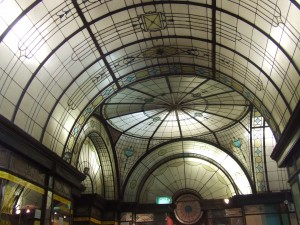 Harry Norris was one of the most influential architects from the Art Deco era in Victoria, and his designs incorporated all the key styles – Moderne, Functionalist, Spanish Mission. He was also one of the most prolific commercial architects between 1920 and 1930. Most of his works were inspired by his regular overseas trips to observe current architectural trends, mainly to the United States, which became annual from 1928 to 1941. As a consequence, his style developed and transformed continually. In 1929, Harry’s client, George James Coles sent him to Europe and America to study trends in designing chain stores. Soon after he came back, he finished the design of the new Coles store (now David Jones) in Bourke Street, Melbourne. He was elected an associate of RVIA 21 February 1946. Norris was highly regarded ‘despite being ostracized by some in architecture profession because he exposed some corrupt practices relating to tendering prices.

NORRIS BUILDINGS IN THE CBD

Norris designed commercial, industrial and domestic buildings. Many commissions were from the Coles and the Nicholas family. The Coles brothers employed Norris to construct, design or or re-model their stores in Victoria, NSW and South Australia.  In 1929, they sent him to the USA to study the design of retail stores and many of the ideas gained were incorporated into his Australian designs.
132-172 Smith Street, Collingwood (1914). Burnham Beeches, the Nicholas domestic home at Sherbrooke is one of Australia’s greatest Moderne houses.

Nicholas Building
Address: 27-41 Swanston Street Date of construction: 1925-26, 1939-40 (extension) Client: Alfred Nicholas, G.J. Coles (extension) The Nicholas Building is the most distinctive commercial palazzo in Melbourne. The building has many classical and Greek revival elements such as large columns, balconies, wide cornice, marble stairs and tiled corridors. The facade is clad with terracotta faience. The cathedral arcade is located on the ground floor and its glazed leadlight barrel vaulted ceiling is a main feature of the building. The Nicholas Building was originally used as offices and currently accommodates many art studios. Melbourne’s last glazed leadlight barrel-vaulted ceiling.

The Nicholas Building: A User’s Manual by Ben Eltham

The Nicholas Building was designed in the 1920s by Harry Norris, perhaps Melbourne’s most important interwar architect. Built for the pharmaceutical magnates Alfred and George Nicholas, it opened in 1926. George Nicholas was a small-time pharmacist in Windsor who had made his fortune with the help of his brother in the First World War, after winning the right to produce aspirin for the Australian Government. The patent for salicylic acid, previously held by the German firm Bayer, had been suspended by then Attorney General Billy Hughes in 1915; the Nicholas brothers won the lucrative contract with the help of entrepreneur Henry Woolf Shmith. With the fighting on the Gallipoli peninsula extracting a frightful toll, the need for aspirin was urgent, and the Nicholas family earned huge revenues, despite incurring heavy debts. After the war, the Nicholases expanded their pharmaceutical business to Asia and England, made huge profits, and became important philanthropists. Their legacy lives on: you can still buy aspirin in Australia under their old trade-name, Aspro Clear.

When the Nicholases decided to build new premises on the corner of Flinders Lane and Swanston Street, they engaged Norris, an architect who would go on to design Alfred’s country house in the Dandenongs, Burnham Beaches. The new building on Swanston Street would include a retail arcade, as well as offices and studio space on the upper floors. Rumour has it that the basement and first floors were to house a laboratory for the Nicholas business; however, as the building’s entry in the Victorian heritage database notes, ‘It does not appear that the Nicholas company ever occupied the building, rather it was built as a speculative office building development.’

A frequent traveller, Norris had been much influenced by the architectural styles he encountered on a trip to California in 1920. The Nicholas Building design is a prominent example of Melbourne’s inter-war style, with a Doric colonnade sitting above giant Ionic pilasters, and clad in a terracotta tiling that its manufacturer Wunderlich called Granitex. According to Christie Petsinis, a Melbourne architect and urban designer, ‘the terracotta cladding used on the building was revolutionary at the time, it was the largest example of terracotta ever used in Australia’.

Date of construction: 1929 Client: Benjamin Fink Harry Norris’ Block Court was a remodelling project where the shopping arcade was introduced to the ground floor to connect Collins Street with the Block arcade. The building was originally the Athenaeum Club built in 1890. Block Court is significantly Art Deco displaying characteristic features like zigzag copper shop window frames, stained glass, terrazzo flooring and elaborate ceiling decoration with stepped geometric shapes and floral motifs. Block Court was a significant contribution to the emerging trend of shopping arcades in Melbourne.

Curtin House was far from the most auspicious address in town when Tim Peach bought it seven years ago. Swanston Walk was still the domain of two-dollar shops, red-light cinemas and tawdry cafeterias, its night-life largely confined to Lounge across the road. The six-storey building at 252 Swanston Street, renamed after John Curtin, the Labor Prime Minister who saw the nation through the second half of World War II, looked as though it had been in a war of its own. But Peach saw potential beyond the smashed leadlighting, ripped-up parquetry and atmosphere of “a dark cave”. He and his partners paid several million dollars for the renovator’s delight in 2000, marking the start of the latest cycle in its already varied history. Now home to bar/restaurant Cookie and the Rooftop Cinema, the latest unveiling at Curtin House came last night with the opening of The Toff in Town, a late-night bar/live music venue on the second floor co-owned by Camillo Ippoliti, owner of Cookie and Chapel Street’s Revolver. It’s an opulent space featuring brass, leather and marble fittings, secret doors, a cabaret-style music area reminiscent of the defunct, much lamented Continental in Prahran, and private railway carriage-like booths with sliding doors. Architect Phillip Schemnitz says the historical layers of the building infuse its latest venture. The stylistic influences of The Toff go back to the mid-19th century when the stretch of Swanston Street between Bourke and Lonsdale hovered on the edge of the city’s red-light and gambling district. “The booths, the choice of dark colouring, are reminiscent of that illicit atmosphere,” says Schemnitz, who has been overseeing the building for eight months.

Built in 1922, Curtin House – originally the Tattersalls Building – housed a gentleman’s club The Melbourne Supper Club  on the first floor for the first eight years of its life. Later it became the headquarters of the Communist Party. Jill and Jeff Sparrow’s book Radical Melbourne: A Secret History recalls that the staircase was the scene of a battle between 150 off-duty servicemen and a small but determined bunch of communists defending their turf in February 1940. Several months later, only minutes after federal cabinet’s decision to outlaw the Communist Party, the building was raided by police, who seized two truckloads of books. After decades of neglect, in the 1980s Curtin House became home to an artistic intelligentsia including opera wunderkind Barrie Kosky and Chunky Move dance company’s artistic director Gideon Obarzanek. The following decade, however, saw it slide into virtual dereliction. “The guy we bought it off had owned it for 15 years and hadn’t told his wife,” says Peach. “Being a good Catholic, he didn’t want to tell his wife because it housed the Barrel Cinema (a sex cinema) on the ground floor. So it was massively under-tenanted and just going to the dogs.”

This significant example of the Moderne style of design from the 1930’s remains remarkably intact and contributes significantly to the aesthetics of a major Melbourne intersection.

Mitchell House is a 6-storey office block designed by renowned architect Harry Norris for brush manufacturers Thomas Mitchell & Company. The building was actually designed to be 10-storeys high with the second story to be constructed at a later stage, but it was never built. The building consists of broad horizontal forms with glazed windows in between.  prominent pediment on the Elizabeth Street side of the building has gold lettering which reads “Mitchell House”. The shop fronts and cantilever balcony are original and remain intact and the foyer space still retains its original décor.
Mitchell House Address: 325-362 Lonsdale Street, Melbourne Date of construction: 1936 Mitchel house is located at the junction of Elizabeth Street and Lonsdale Street. The building distinctively reflects the architecture language of a European modern architecture of the 1920s and 30s with its clean horizontal glass and plain wall surfaces, broken by a contrasting vertical stairwell element.

A Guide to Melbourne Architecture by Philip Goad Watermark Press.

A Pictorial Guide to Australian Architecture, Styles and terms from 1788 to the present by Richard Appleby, Robert Irving. Peter Reynolds, Angus and Robertson.

Walking Melbourne, A National Trust guide to the historic and architectural landmarks of central Melbourne by Rohan Storey.

The Place for a Village. How nature has shaped the city of Melbourne. Gary Presland.