Explore the 30 leafy and literary streets of Elwood, Melbourne among the many beautiful art deco buildings and parklands along 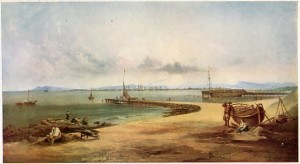 Elwood Canal
Read poems from the poets listed on the street signs above.
Or bring your own favourite poems or your own poems and read them.
Over 30 poets are immortalised in the street names particularly around the poetic triangle of Glenhuntly, Tennyson, and Barkly Streets. Street names include Wordsworth, Tennyson, Dryden, Browning, Ruskin, Milton, Addison, Cowper, Spenser, Thackeray, Southey, Lindsay, Byron, Goldsmith, Scott, Shelley, Keats, Meredith, Coleridge, Burns, Masonand Dickens, Bronte, Marlowe, Daley, Gordon and Lawson.

Elwood’s streets were named by St Kilda Council in the 1850s onwards after famous literary poets and authors in order to uplift the moral character of the residents of Elwood. Elwoodians had a reputation as a cantankerous bunch of malcontents who often refuse to pay their rates on the excuse that Elwood is mainly a repository of polluted swamplands, graveyards, human nightsoil depots and pig farms.

Today residents often use the term ‘Poets’ Corner’ the suburb of Elwood, Melbourne. Many of these poets are also immortalised in the street names of leafy Elwood, particularly around the poetic triangle of Glenhuntly, Tennyson, and Barkly Streets. Examples below:

SOUTHEY STREET
To a Goose by Robert Southey
If thou didst feed on western plains of yore
Or waddle wide with flat and flabby feet
Over some Cambrian mountain’s plashy moor,
Or find in farmer’s yard a safe retreat
From gipsy thieves and foxes sly and fleet;
If thy grey quills by lawyer guided, trace
Deeds big with ruin to some wretched race,
Or love-sick poet’s sonnet, sad and sweet,
Wailing the rigour of some lady fair;
Or if, the drudge of housemaid’s daily toil,
Cobwebs and dust thy pinion white besoil,
Departed goose! I neither know nor care.
But this I know, that thou wert very fine,
Seasoned with sage and onions and port wine.

MILTON STREET: On His Blindness by John Milton

When I consider how my light is spent
Ere half my days in this dark world and wide,
And that one talent which is death to hide
Lodg’d with me useless, though my soul more bent
To serve therewith my Maker, and present
My true account, lest he returning chide,
“Doth God exact day-labour, light denied?”
I fondly ask. But Patience, to prevent
That murmur, soon replies: “God doth not need
Either man’s work or his own gifts: who best
Bear his mild yoke, they serve him best. His state
Is kingly; thousands at his bidding speed
And post o’er land and ocean without rest:
They also serve who only stand and wait.”

BYRON STREET: She Walks In Beauty by Lord Byron

She walks in beauty, like the night
Of cloudless climes and starry skies;
And all that’s best of dark and bright
Meet in her aspect and her eyes:
Thus mellowed to that tender light
Which heaven to gaudy day denies.

One shade the more, one ray the less,
Had half impaired the nameless grace
Which waves in every raven tress,
Or softly lightens o’er her face;
Where thoughts serenely sweet express
How pure, how dear their dwelling place.

And on that cheek, and o’er that brow,
So soft, so calm, yet eloquent,
The smiles that win, the tints that glow,
But tell of days in goodness spent,
A mind at peace with all below,
A heart whose love is innocent!

WORDSWORTH STREET: Wandered Lonely As A Cloud by William Wordsworth

I wandered lonely as a cloud
That floats on high o’er vales and hills,
When all at once I saw a crowd,
A host, of golden daffodils;
Beside the lake, beneath the trees,
Fluttering and dancing in the breeze.

Continuous as the stars that shine
And twinkle on the milky way,
They stretched in never-ending line
Along the margin of a bay:
Ten thousand saw I at a glance,
Tossing their heads in sprightly dance.

The waves beside them danced, but they
Out-did the sparkling leaves in glee;
A poet could not be but gay,
In such a jocund company!
I gazed—and gazed—but little thought
What wealth the show to me had brought:

For oft, when on my couch I lie
In vacant or in pensive mood,
They flash upon that inward eye
Which is the bliss of solitude;
And then my heart with pleasure fills,
And dances with the daffodils.

LAWSON STREET: A Song of the Republic by Henry Lawson

Sons of the South, your time will come –
Sons of the South, ’tis near –
The “Signs of the Times”, in their language dumb,
Fortell it, and ominous whispers hum
Like sullen sounds of a distant drum,
In the ominous atmosphere.

Sons of the South, aroused at last!
Sons of the South are few!
But your ranks grow longer and deeper fast,
And ye shall swell to an army vast,
And free from the wrongs of the North and Past
The land that belongs to you.

ALL is over! fleet career,
Dash of greyhound slipping thongs,
Flight of falcon, bound of deer,
Mad hoof-thunder in our rear,
Cold air rushing up our lungs,
Din of many tongues.

Once again, one struggle good,
One vain effort;—he must dwell
Near the shifted post, that stood
Where the splinters of the wood,
Lying in the torn tracks, tell
How he struck and fell.

Satin coat that seems to shine
Duller now, black braided tress
That a softer hand than mine
Far away was wont to twine,
That in meadows far from this
Softer lips might kiss.

All is over! this is death,
And I stand to watch thee die,
Brave old horse! with bated breath
Hardly drawn through tight-clenched teeth,
Lip indented deep, but eye
Only dull and dry.

With a flash that ends thy pain,
Respite and oblivion blest
Come to greet thee. I in vain
Fall: I rise to fall again:
Thou hast fallen to thy rest—
And thy fall is best

Sound, sound the clarion, fill the fife!
To all the sensual world proclaim,
One crowded hour of glorious life
Is worth an age without a name.
SHELLEY STREET: Good-Night by Percy Bysshe Shelley
Good-night? ah! no; the hour is ill
Which severs those it should unite;
Let us remain together still,
Then it will be good night.

How can I call the lone night good,
Though thy sweet wishes wing its flight?
Be it not said, thought, understood —
Then it will be — good night.

To hearts which near each other move
From evening close to morning light,
The night is good; because, my love,
They never say good-night.

O love is the crooked thing,
There is nobody wise enough
To find out all that is in it,
For he would be thinking of love
Till the stars had run away
And the shadows eaten the moon.
Ah, penny, brown penny, brown penny,
One cannot begin it too soon.

KEATS STREET: On The Sea by John Keats

It keeps eternal whisperings around
Desolate shores, and with its mighty swell
Gluts twice ten thousand caverns, till the spell
Of Hecate leaves them their old shadowy sound.
Often ’tis in such gentle temper found,
That scarcely will the very smallest shell
Be moved for days from whence it sometime fell,
When last the winds of heaven were unbound.
Oh ye! who have your eye-balls vexed and tired,
Feast them upon the wideness of the Sea;
Oh ye! whose ears are dinned with uproar rude,
Or fed too much with cloying melody,—
Sit ye near some old cavern’s mouth, and brood
Until ye start, as if the sea-nymphs choired!

The grey sea and the long black land;
And the yellow half-moon large and low;
And the startled little waves that leap
In fiery ringlets from their sleep,
As I gain the cove with pushing prow,
And quench its speed i’ the slushy sand.

Then a mile of warm sea-scented beach;
Three fields to cross till a farm appears;
A tap at the pane, the quick sharp scratch
And blue spurt of a lighted match,
And a voice less loud, through its joys and fears,
Than the two hearts beating each to each!

KENDALL STREET: Bellbirds Henry Kendall
By channels of coolness the echoes are calling,
And down the dim gorges I hear the creek falling:
It lives in the mountain where moss and the sedges
Touch with their beauty the banks and the ledges.
Through breaks of the cedar and sycamore bowers
Struggles the light that is love to the flowers;
And, softer than slumber, and sweeter than singing,
The notes of the bell-birds are running and ringing.

The silver-voiced bell birds, the darlings of daytime!
They sing in September their songs of the May-time;
When shadows wax strong, and the thunder bolts hurtle,
They hide with their fear in the leaves of the myrtle;
When rain and the sunbeams shine mingled together,
They start up like fairies that follow fair weather;
And straightway the hues of their feathers unfolden
Are the green and the purple, the blue and the golden.

Often I sit, looking back to a childhood,
Mixt with the sights and the sounds of the wildwood,
Longing for power and the sweetness to fashion,
Lyrics with beats like the heart-beats of Passion; –
Songs interwoven of lights and of laughters
Borrowed from bell-birds in far forest-rafters;
So I might keep in the city and alleys
The beauty and strength of the deep mountain valleys:
Charming to slumber the pain of my losses
With glimpses of creeks and a vision of mosses.