These are some readings  used by students on our popular Runner/Squizzy Tour of the CBD exploring the novel by Robert Newton. See  Squizzy Taylor school Tour 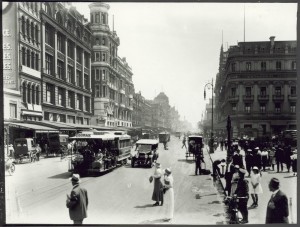 STOP ONE: PARLIAMENT
Down near the Treasury Gardens he was with Parliament House up on the right…Approaching the Spring Street intersection I saw the blue and green runners some ten feet to my right. .. Like a madman I threw myself across the intersection between tooting cars and made it to the other side. I stepped into the Spring Street gutter and ran. (p 15)
STOP TWO: PUNCH LANE, BOURKE STREET THEATRES
At school I quickly grew bored with my books. I dreamt of Bourke Street with its flashing theatre signs, ‘Bijou’ and ‘Gaiety’ and the sly grog joints and brothels of Little Lonsdale.. The street was my classroom now… (page 4)
STOP THREE: SLUM HALL, LT BOURKE STREET
Seeing me she broke into a smile. Charlie! Gawd, fer a minute I thought ya was one of me customers. There’s some right nutters among ‘em. ….’ I know ya don’t need me tellin’ yer, after all we all go ta make a living but there’s some nasty types in that Richmond push. Take it from me.’
STOP FOUR: ROMEO LANE
As soon as the parcel hit my hand I looked at the address. 200 Bourke Street, Melbourne. Immediately I knew it to be The Orient, a popular drinking den where a criminal record guaranteed you entry.
STOP FIVE: EASTERN MARKET, ALBERT FOX GREENGROCERS
At the Eastern Market in Bourke Street, I slowed to a walk and unfolded the list in my pocket. The first entry said, Albert Fox — Greengrocer 111 Bourke Street, £3.
‘I’ve come ta collect Mr Taylor’s money,’ I said
‘And what makes ya think I’d be willin’ ta fork over me ‘ardearned ta a pipsqueak like you?’ ‘
I can think of one good reason, Mr Fox. If Mr Taylor has ta come down ‘ere with Knuckles in tow, they won’t be sittin’ down fer tea and biscuits. I’ve just come from Mr Taylor’s place and I can tell ya, he’s itchin’ ta do ‘is block.’    (p 102-3)
STOP SIX: NAURU HOUSE, LT COLLINS STREET – KILPATRICKS JEWELLERY
‘It’s just what I ‘eard, Squiz. They’re sayin’ ya short changed ’em with the takin’s from the jewellery job …’
‘Too bloody right I did. It was me and Matt Daly what did the joint over. I only let Cutmore shift the stuff ta get ‘im off me back. Sniffin’ around like a shit’ouse rat, ‘e was.’
STOP SEVEN: THE ORIENT HOTEL, 200 BOURKE STREET
7A The Orient was fast approaching and I knew well that time was against me. I was gaining. Fast. The path ahead looked clear so I tucked my head and bolted. Twenty yards became fifteen. Fifteen became ten. I was near flying. Five yards. Barlow was almost there. As he raised his hand to the door, he turned and saw me lunging. Too late. Together we fell through the door and crashed to the ground in a heap, much to the delight of the crowded bar.
7B ‘Not so fast, gents,’ he said. ‘Are ya not fergettin’ somethin’?’`Fergettin’ somethin’?’ asked Dasher. ‘Like what?’
‘The eggs, Dasher, the eggs.
7C ‘Don’t let on, Charlie Feehan,’ he whispered, ‘but yer eggs  I ‘ard boiled ‘em meself this mornin’. Welcome aboard, lad.
STOP EIGHT WARATAH LANE, GAMBLING DENS
For the residents of Richmond, only one person came to mind whenever Goodwood Street was mentioned. That person was Henry Stokes. Stokes was a self proclaimed Good Samaritan….The truth? Stokes was an SP bookmaker and sly grogger who’d done so well at his trade that he’d managed to build up a small fortune. As part of his tireless charity work, he ran Melbourne’s biggest two-up school (p59)
STOP NINE: THE MELBOURNE HOSPITAL
Snowy Cutmore was well known as a man with a violent streak. Blue-eyed and blond-haired, he was one of the kingpins of the Fitzroy push — an unpredictable man with a liking for a scrap. Put simply, messing with Snowy Cutmore was bad for your health.
STOP TEN CROFTS LANE – RUNNING BOOZE AND DRUGS
‘Jenkins?’ asked Nostrils. ‘That’s me.’ ‘We’re Squizzy Taylor’s lads, sent fer the liquor.’ ‘Come through, lads, I’ve been expectin’ ya… “Ere it is,’ he said. ‘Let’s see. . . two whisky, one gin and a ‘alf dozen bottles a beer. Must be some shindig.’ Carefully Jenkins loaded the beer into an old cement bag then fetched the whisky and gin. (p62)