EXPLORE Melbourne’s vibrant and fascinating maze of lanes and arcades which have propelled Melbourne into a  local and international attraction voted seven times the most livable city in the world. Our tours can be personalised to your interests  including choice of time and dates.
WE blend themes including street art, architecture, shops & cafes, hidden places, gold rush, Melbourne characters and lanes history. And great stories! If you have a special interest area just let us know!
OUR places show the Melbourne Story from Indigenous to settlement to goldrush to Marvellous Melbourne to multiculturalism to the rise of the most Liveable City.
FREE!! maps, chocolate, welcome to country, historic souvenirs. Perfect for groups, children and families. 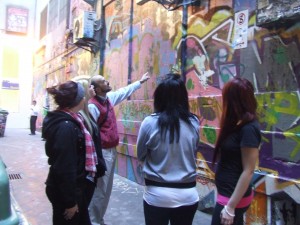 Our 2.5 hour tours can start from Federation Square opposite Flinders Station.

‘What a wonderful way this was to explore the inner secrets of Melbourne….stories, the personalities,  architecture, artworks came to life. Mark
“Thanks everyone for a terrific day yesterday exploring the interesting but often overlooked side of Melbourne.  Thanks so much to our terrific guide whose enthusiasm and passion for Melbourne shone through in all of his stories and giveaways shared with the team!” The Haigs Chocolate Team .
Thank you for our Team walking tour on Wednesday. People from the group could not speak highly enough of you and the tour content.  They all thoroughly enjoyed it and learnt a lot about our city including the locals!  Michelle.

More about Melbourne’s Lanes
Every lane we choose tells an important story about Melbourne today and past. Robert Hoddle designed Melbourne’s street map in 1836 but refused to include lanes – he saw them as detrimental to the respectable establishment.  Melbourne’s little laneways evolved to create access to buildings during subsequent population explosions such as the gold rush.  Some were later 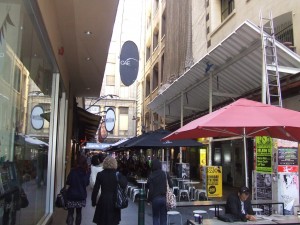 roofed as arcades to provide refuge from the weather and crowds and to provide more space for shops. The lanes therefore symbolically and practically are the ‘People’s Melbourne’.

In the late 1990s the lanes became the key strategy for Melbourne’s successful reincarnation as the ‘most liveable’ city in the world. The approx  200 lanes are rated by the city according to their heritage values. It can be a life-long journey exploring all of Melbourne’s  ever-changing lanes .