VISIT the historical places of Madame Brussell’s life and times. Her magnificent bordellos in Lt 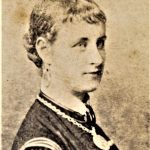 Lonsdale, Lt Bourke and Chinatown were famous in gold-rush Melbourne. Her ‘flash houses’ opposite Parliament defied the bigotry of powerful men who vilified her as the ‘Queen of Evil and Harlotry’ and triggered the criminalisation of sex workers for over a century, until reversed by the Victorian parliament in 2022.
EXPLORE THE stories and places of Melbourne’s 19th century underclass including Madame Brussell, ‘disorderly women’, missions,  dance halls,  markets, publicans, gangsters, opium dens,  ragged schools, fortune tellers, ‘Salvation Janes’, gambling, suffragettes and burlesque theatres. 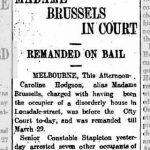 OUR tour is the story of a roller coaster era: Gold Rush, Marvellous Melbourne,  the 1890s Depression, Prohibition, Temperance and Suffragette movements. It is also the story of resilient women under pressure and how working communities can be lost and denigrated.
DISCOVER how the so-called ‘loathsome slum’ of Lt Lon has been transformed into an exciting precinct of cafes, rooftop bars, restaurants, stunninG architecture, street art and heritage. 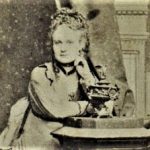 LEARN about  the archaeological digs and artefacts that brought ‘Little Lon’ to life and revealed a fascinating ,complex and exciting history.

‘I just wanted to say thank you for the great tour you gave last night, everyone had a wonderful time and for our line of work, all that history of welfare and everything else about this little corner of Melbourne was absolutely fascinating.‘ Staff group, Office of the Hon. Daniel Andrews MP.
Thank you again for taking us on the tour of Madam Brussell’s Melbourne, we all found out some fascinating information about our own ‘home’ city which we didn’t know. So much history!  Staff group, Royal Melbourne Hospital.
I want to thank you for your time and insight today giving us that fantastic historical walk. We thoroughly enjoyed the experience and I certainly gained a richer understanding of Madame Brussels and who she might have been. I felt an incredible appreciation for people like you who are passionate and actively working to tell these stories that have shaped the deeply interesting character of our city. Emily and friends.

An’ then I am simply orlright,
Can any bloke point to a better old joint,
Than Bourke Street on Saturday night?’
Drinking Song.
“(Little Lon is) a  loathsome centre in which crime, gambling hells, opium dens and degraded Chinese abound, and where hundred of licentious and horribly debased men and women are herded like swine… “a disgrace to any civilized city on earth.”   Evangelist Henry Varley 1891.
From 11 o’clock in the forenoon till 3 or 4 next morning – there is fully thirty larrikins from 14-22 years of age…[that] live entirely on their prostitutes… they watch during the night for men intoxicated to rob them…they know the time the police is due [so] they disperse until they pass.  Argus, 1882.

The Madam Brussell’s Tour is a fascinating insight into the values, morals and lifestyles of 19th century Melbournians and the architectural transformation of a city which had abandoned its poor into a modern city with a social welfare safety net and striking contemporary architecture  (See Pictures). Then there’s that mystery of the missing parliamentary mace, Melbourne’s oldest outstanding reward after 120 years ($50,000) claimed to be lodged in Madam Brussell’s bagnio. 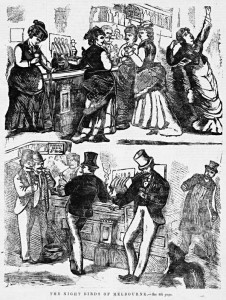 HISTORY BACKGROUND
‘Madam Brussells’ was born Caroline Lohmar in Germany, the year before the Gold Rush. (See biography The Life of Caroline Hodgson by Meyer Eidelson).  Caroline (1850-1908) was a contemporary of  Saint Mary Mackillop (1842-1909) who was born nearby and set up her missions and ragged schools 200 metres away. These two very different lives make fascinating comparison.  Both were responses to the extreme desperation of many women and both fell foul of  outraged males in the church hierarchy. The slums of Little Lon and Little Bourke were an intensive hotbed of social justice agitators: anarchists, communists, gays, feminists, slum sisters, church leaders, Chinese civil rights activists  and others (see below) whose groundbreaking programs powerfully influenced our welfare safety net of today.
Prostitution, petty crime and larrikinism
Archaeologist Justin McCarthy suggests that by 1854, only twenty years after Melbourne was established as a city, the area was well established as a notorious “red light” and slum district. It was associated with prostitution, petty crime and larrikinism. The numerous narrow back alleys and small cottages of this area housed, by this time, a growing number of prostitutes, The Argus newspaper at the time complaining of “females of the lowest and most disreputable class, who pursued their calling with the lowest and most filthy language and conduct‘. The truth was very different. Many of the working women were victimised by prejudicial harassment and imprisonment leading to laws criminalising of sex-workers for over 100 years and only repealed in 2022.

Fergus Hume‘s immensely popular The Mystery of a Hansom Cab, written in 1887, described life in a slum in the nearby lanes behind Little Bourke Street, as exposed by its middle class heroes. Writing in 1915, C. J. Dennis‘s humorous novel The Songs of a Sentimental Bloke spoke of the “low, degraded broots” (brutes) of Little Lon.

Little Lon’s most opulent brothels tended to face main streets, but were discreetly run. “Disorderly” or “low class” brothels tended to be in the narrower laneways behind. Tobacconists, confectionery, cigar and fruit shops in the area also sometimes acted as fronts for prostitution. In the small houses of the laneways, single or small groups of prostitutes also ran the most primitive cottage brothels. For example, the still extant Number 17 Casselden Place was operated by a single Chinese prostitute known as “Yokohama” (Tiecome Ah Chung) as late as the 1920s.

“Madam Brussels”, facing Lonsdale Street, attracted a wealthy class of clientele, and consequently also greater notoriety, although prostitution itself was not illegal in 19th century Victoria.

Madam Brussels was far from the only elite brothel in the area. In 1867 Police Commissioner Standish introduced the visiting Prince Alfred, Duke of Edinburgh, to a brothel run in Stephen Street by Sarah Fraser. Other “orderly” brothels also included those of “Scotch Maude” and Biddy O’Connor.

In October 1891, the mace of the Victorian parliament was stolen. It was claimed that it had found its way to Annie Wilson’s “Boccaccio House”, in the Little Lon district, where it was supposedly used in a mock parliament. It was not recoveredThe connection between Victoria’s politicians and the brothels of Little Lon was reinforced when Chief Secretary Sir Samuel Gillott was revealed to have had ongoing financial dealings with Madam Brussels.

Understanding the people of Little Lon
Recent writers have emphasized the vibrancy and complexity of Little Lon’s population of migrants and itinerant workers, and challenged the stereotype of the area as a miserable slum. This also seems to have been born out by the major archaeological studies conducted in the area in 1988 and 2002, which discovered a wide variety of objects from abandoned cesspits and rubbish dumps. Many were typical of domestic use in the nineteenth century, but a number gave indications of a flourishing community and occasionally, prosperity. Dr. Alan Mayne has commented;
“Little Lon was clearly not, as the slummer genre would have it, an unstable mishmash of listless and directionless deviants. Nor were its inhabitants passive victims to poverty.”  By the end of the nineteenth century, the area had become home to a diverse migrant population of Chinese, German Jews, Lebanese and Italians.

Changes in the early twentieth century
Leanne Robinson comments that in the early twentieth century the Little Lon district began to change significantly.[Newspapers had increasingly demanded a clean up of the area, John Norton‘s The Truth being particularly vocal in its attacks, especially on Madam Brussels, the “queen of harlotry.” Workshops and small factories increasingly took over the area. Many of the hotels and brothels were gradually being demolished and “prostitutes found themselves forced into… areas such as Gore Street and the notorious ‘Narrows’ around the Fitzroy Town Hall” Policemen had greater powers and prostitutes were subject to new laws.[Around 1914, the buildings between 6 and 34 Lonsdale street, including Madam Brussels former brothel (which had closed in 1907) were demolished and replaced by small factories.

However, people continued to live in the area until the 1950s, when much of the district was compulsorily acquired for redevelopment by the Federal Government. In the early 1990s, a former resident of the Little Lon district was interviewed. Marie Hayes lived in her parent’s home in Cumberland Place (in the northern half of the district) until she married in 1940. Of Little Lon she said This area used to have a bad name. Some of these streets were not pleasant, but everyone has always been kind to us. No one [had] ever molested us, or even made us afraid. When you have lived so long in the heart of the city, you want to stay here alway.

The area today
The Oddfellows Hotel, built in 1853, on the corner of Little Lonsdale Street and “Madam Brussels Lane” (Little Leichardt Street)

In the northern half of the district, all buildings and streets were demolished in the late 1950s to make way for Commonwealth buildings.Today, only a few nineteenth century buildings survive in the southern half of the area. These include

Oddfellows Hotel, built c.1853 at 35-9 Little Lonsdale Street. Although now a licensed premises, this building has had a number of uses, including a Chinese furniture maker’s factory

Factory at 25 Little Lonsdale Street. A former shop and forge, built about 1868 for engineer Alexander Lugton. This is one of few surviving examples of the small businesses that operated in the area in the nineteenth century.[27] The company expanded in the late nineteenth century and eventually took over a number of buildings in the district.

Elms Family Hotel, on the corner of Spring Street and Little Lonsdale Street. This is the only commercial business in the area that has operated continuously on the same spot in the district since the mid nineteenth century, although the building has been remodeled.

Church of England Mission building, next to the Elms Family Hotel, one of a number built in the district by Church missions to cater for local residents.

118-162 Little Lonsdale Street, 100 metres west of the area. A small streetscape of former shops and dwellings between Exploration lane and Bennetts Lane, that most resembles the Little Lon of the nineteenth century.

Several other buildings in the district have been redeveloped or incorporated into modern office blocks.

“Coopers Hotel” at 282 Exhibition Street. Originally built as a hotel for James Cooper in the 1850s, but later delicensed. The building served as a Mission building, a home for girls, and later a post office before being reopened as a hotel.

Major archeological digs were conducted in the area in 1988 and 2002.[34] Many of the objects uncovered are on display at Museum Victoria in a recreated “Little Lon” streetscape.