MURDER!   MYSTERY!   MAYHEM!
EXPLORE  a range of infamous, mysterious and even bizarre crimes connected to the Melbourne CBD.
INVESTIGATE unsolved murders and cold cases? Millions of dollars in rewards remain uncollected.
LEARN about the role of forensic science and evidence gathering in solving crimes.
OUR TOURS  are highly interactive including images, news articles, readings,  We provide souvenirs including chocolate and certificates.
WHERE WE GO:  Historic Melbourne venues,  famous buildings, lanes and arcades,  quirky places – a great way to explore Melbourne!

WHEN: Day or evening by arrangement.  Tours are 2.5 hours or as requested (school tours are two hours). Tours start from Federation Square and finish Bourke Street near Parliament. We go to significant locations, consider the evidence, and ask the questions.

‘Thank you for your tour last night. Everyone loved it, and really appreciated the souvenirs, especially the ‘criminal’ chocolate frogs! The range of stories and activities was great’.   Haigs Chocolate staff group.
‘I really enjoyed the walk and have been on it twice. My friend raved about it to her friends in Perth.  Thanks for engaging our teenagers as well, your walk came out on top.’  Win.
“Fascinating variety of strange events, places and happenings. We had 15  secondary students engrossed by it all including the activities and readings etc.”  Lisa, teacher
The guide was great and knowledgeable yet engaging. I have been living in the city for three years but didn’t know it had so many layers. It was well worth the time and one should do this walk at least once during their time in Melbourne.”  Mia, Events Manager

WHY CRIME? Crime can provide valuable insights into Melbourne’s history, the justice system, and forensics. Awareness may assist victims of crime and their families who have yet to achieve justice. 200 rewards in Victoria since 1963 remain unclaimed.  To provide information anonymously to Crime Stoppers, ring toll-free number 1800 333 000.

CAN YOU SOLVE MELBOURNE CRIMES,  MYSTERIES AND COLD CASES?

MOLLY DEAN – UNSOLVED.  Why has this 1930 murder been the subject of four books?
DEATH AT ST PAUL’S – UNSOLVED:   St Patrick’s  Cathedral  7 March 1997.  Did guilt or blame kill Gordon Smith? Who committed two murders in broad daylight in country town?
MANHUNT HOSIER LANE  How did citizens capture an accused killer ‘living in plain sight’  19 August 2019?
GUN IN THE YARRA 2014 – UNSOLVED. What links 3 murders and 3 armed robberies ($6m) and 1 missing gun in the Yarra River 2014. $3m reward.
NAB BANK, COLLINS ST, 1954 – UNSOLVED. A young bank clerk inexplicably fell 9 floors to her death. Accident? Suicide? Murder? Did a three-times serial killer go undected?
33 JEWELLERY HEISTS 2016-17  Who was receiving the goods? Is there a connection to the Apex Gang? Why are police raiding bank vaults in Bourke Street? Who owns an unexplained $3m in gold?
UNDERBELLY EXECUTIONS 2004 – UNSOLVED:  Did a corrupt detective meet a hitman in a Collins Street bar to arrange the 27th and 28th victims of Melbourne’s gangland war?  Was Carl Willam’s death connected? Is lawyer X involved?
$6M REWARD 2017 TYNONG MURDERS – UNSOLVED $6m reqward announced for a six-times serial killer. 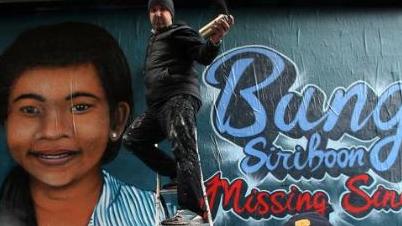 MISSING – UNSOLVED! 38,000 people go missing each year in Australia. How are street artists in 2019 helping to find missing persons like Bung (2011)? $1m reward.
‘COWARDS PUNCH’ LAW 2017– UNSOLVED: Who killed Shannon McCormack at QBH nightclub in 2007? Two more deaths in 2017 outside venues including ACDC lane. Sixty one-punch assaults remain unsolved.
TERROR AT FLINDERS ST STATION.   Five terror incidents 2017-18 using cars as weapons.  Are these copycat crimes? Why the homeless heroes?
WEEPING WOMAN– UNSOLVED:   4 August 1986: Who stole Australia’s most valuable painting?
ST PATRICKS DAY MASSACRE – UNSOLVED  17 March 1978: Who executed three jewelers in Victoria’s most violent crime?
HIJACK 2016. Why did graffiti artists capture and terrify a train on Boxing Day?
PAJAMA GIRL 1933– UNSOLVED: Did the murderer of the Pyjama Girl escape justice?
HOW are Melbourne  commuters protecting each other on public transport in 2018?’
THE NEON VANDALS– UNSOLVED:  Who stole six tons of neon from the Herald Sun sky-sign 2001?
FIRST AND LAST MAN  LAST MAN HANGED – UNSOLVED?:  – Ronald Ryan was hanged for murder 3 Feb 1966. But did he do it?
TUNNERMINERWAIT was the first man hanged 20 January 1842? Was he a terrorist or a freedom fighter?
BATMAN ‘TREATY’  6 June 1835:  Is Melbourne’s first piece of paper also its bloodiest? Is it a forgery? And why does Batman receive Indigenous support in 2018.
GUN ALLEY MURDER– UNSOLVED:  30 December 1921: Who murdered Alma Tirschke? Why does the ghost still walk? Can you solve a crime after ninety years?
HOSTAGE SIEGE, Meyers Place, Australia Day 1978.  What ended the shotgun siege? What was Mark ‘Chopper’ Read’s connection?
THE NED KELLY CURSE 1889: Did a curse kill Redmond Barry?
BODY in the Sugar Bag 29 March 1937– UNSOLVED : Who owned the four severed body parts?
FITZROY VENDETTA– UNSOLVED: : Who killed Squizzy Taylor  and Snowy Cutmore 27 October 1927 ?
ARM in a Shark Case  17 April 1935– UNSOLVED: :  Who lost a tattooed arm  in a shark?
CASE OF THE WALKING Corpse – How do you spoil the perfect crime?
PARLIAMENT SNIPERS 1860: Is the Parliament designed to shoot protesters?
THE MACE and the Madam– UNSOLVED: :  9 October 1891: Where is the parliamentary mace? ($50,000 reward).
MISSING TEENAGER– UNSOLVED: – 2 February 1992: Is missing Prue Bird linked to the Russell Street bombing? ($500,000 reward).
TIN FENCE– UNSOLVED:   Assassin  11 December 1979: Who assassinated Ray ‘Chuckles’ Bennet in the Magistrates Court?
GREAT BOOKIE Robbery  21 April 1976– UNSOLVED: : Who committed Australia’s greatest armed robbery?
CHOCOLATE FROGS: What is the connection to social justice?
RMIT HANGINGS 20 January 1842: Were Tunnerminerwait and Maulboyheenner terrorists or freedom fighters?

AND MORE?
The Burke and Wills ‘Tragedy’  20 August 1860/ 21 April 1861: Was the choice of Burke as an expedition leader a tragedy or a conspiracy?
Where is Larry La Trobe 1992?: Who stole Pamela Irving’s dog?
The Great Continence Mystery  1904: How did the women of the 19th century hold on?
The Melbourne Club and John O’Hara Bourke 1860: Did seven men die because of a gentlemen’s agreement?
GRAFFITI Vandal  27 April 2010: Who destroyed Banksy’s Little Diver? What happened to the parachuting rats?
The ‘Brown Out’ Strangler May 1842: Did a woman die because of a cautious sergeant?
The Theatre Ghost Mystery 3 March 1888: Is there a Ghost at the Princess theatre? Do ghosts exist?
Lola Montez and John O’Hara Bourke 1860: Did seven men die because of the Spider Dance?
The Chinatown Riot 13 February 1904: What caused the riot?
The Apokolopti Bombing  1 December 1928: Were the wharfies framed?
Ten Years of Bombs  1960-1970: Who ran a terror campaign in Australia against Yugoslavia and were they protected by spooks?
The Sealed Room Case 1960: Who murdered Sam Borg and nailed the door shut – from the inside?
Haunting of the State Library 2005: Why is the State Library the most haunted building in Melbourne?
The Ned Kelly Curse 11 November/23 November 1880: Redmond Barry died 12 days after Kelly. Did Ned Kelly kill Redmond Barry with a curse?

$100,000 REWARD for information leading to arrest over the death of Shannon McCormack a victim of a coward-punch homicide at the Queensbridge Hotel 2007.
The Werribee Murders Case 1836: Who killed Franks and Hindes?
The Aboriginal Massacre 1836: Did Melbourne settlers massacre the Wathaurung tribe in revenge for Charles Frank’s murder?
The Children of the Dead  1854/5/9: Who left their dead children outside the Old Melbourne Cemetery (Queen Victoria Market) and why?

280 unsolved murders inVictoria since the 1940s