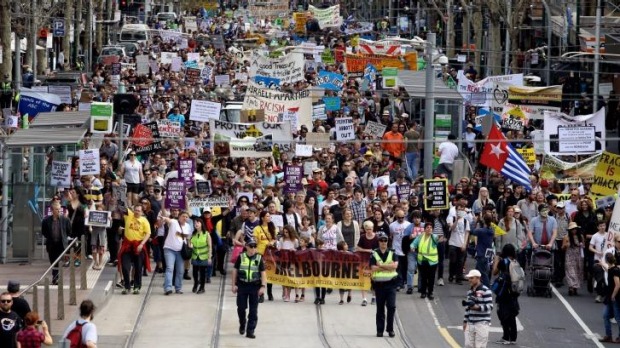 Protest in Swanston Street against budget cuts by Government to low-income groups 2015.

Melbourne has been described as the founding heartland of Australian democracy and diversity. Explore iconic locations in the City of Melbourne that tell important stories of events, places and people that influenced social justice and freedoms in Australia. These can include civil rights, movements such as Aboriginal rights, Women’s emancipation, free education, reconciliation, disability, moratoriums, gender equality, multiculturalism, homelessness, conscription, ANZACs, democracy, the right to vote, anti-war protests, anti-racism, workers rights, artistic protest and creativity.

‘Melbourne Walks offers a superb introduction to the history of protest and justice issues in the City of Melbourne. Our school tour was characterised by impressive and comprehensive knowledge, high levels of student engagement, good humour and practical concern for our (high school) students on a warmish afternoon. I am very comfortable in giving Melbourne Walks my unreserved endorsement.’      Sacred Heart College, Geelong.

Government by the people and for the people and not one half the people.
Vida Goldstein, The Millenial ‘Monster’ petition
We swear under the banner of the Southern Cross to stand truly by each other and fight to defend our rights and liberties. Peter Lalor 1854

Melbourne citizens protest outside St Paul’s Cathedral at Government attack at Eureka in 1854.