Take one of our tours without leaving the room! We have provided many illustrated ‘Virtual tours’ using speaker, images and historic artefacts for many conferences, forums, AGMs, public meetings, historical societies, universities, schools and launches.
Your speaker is Meyer Eidelson, former president of the St Kilda Historical Society, film maker and the author of fifteen books about Melbourne including the award-winning Melbourne Dreaming. Meyer has designed over 100 cultural and heritage tours across Melbourne for his walking tour company Melbourne Walks.
Virtual Tours can be created from the many listed Melbourne Walks or include those below. Talks are usually one hour but can be any length. For more information on arrangements or costs please contact melbwalks@gmail.com or 03 90907964.

Examples of three popular talks!!
Bearbrass – Discovering Early Melbourne
Meyer Eidelson will take us on a Virtual Tour of early Melbourne, once known as Bearbrass. We will travel past early settlers’ homes, Batman Hill, jails, pub, church, docks, woolstore, warehouses, auction house, market, customs, newspaper office, Melbourne Club, Yarra Yarra falls, Aboriginal camp etc. He will pursue the political, social and economic reasons that created this village and who were the personalities that shaped it, from the larrikins and battlers to the gentrified speculators.
Melbourne’s Secrets  – A hidden history of the CBD
Take an illustrated virtual tour to the Melbourne’s lost, forgotten, mysterious or hidden 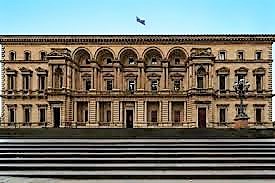 historical  corners with author and historian Meyer Eidelson. The locations are a mixture of Melbourne riddles,  topographies, forgotten architecture, lost buildings, unsolved murders, hauntings, Indigenous sites, drownings, unusual personalities, hangings but best of all GREAT stories!
The Life and Adventures of William Buckley
Walk in the footsteps of the Wild White Man, an escaped convict and Victoria’s first European  resident, who lived  lived with the Wathawurring tribe for 32 years before Batman’s arrival. Where did he go, how did he survive and why the controversies over his contribution?  In 1985 Meyer Eidelson walked 320 kilometres retracing Buckley’s escape route  in 1803from the short-lived British settlement at Sorrento. This illustrated talk tells what he discovered.

Previous sessions
Indigenous History of Melbourne
Dear Friends
Meyer Eidelson Storyteller/Performer, Social Commentator, Author, Entertainer will facilitate our next Talking on our next Tuesday meeting on the topic of our indigenous History. Meyer has written over 14 books and published a number of others as the publishing coordinator of the St Kilda Historical Society.
“I tell the stories of special, often secret places in Melbourne and try to seek out the unique memories and lives of people who lived in those places. My passion for local history led me to walking tours which I see as a theatre of the street that puts people, place and memory on the stage. I love the dictum of Herman Hesse: “Every person is more than themselves. He or she represents the special, the unique meeting point in which converges the world’s events once, just once and never again. Therefore every story of every person is important, eternal and holy.” As a naturalist I have also had a lifelong pursuit of knowledge about Indigenous culture which I feel is the key to the truth about the Australian landscape”
Coordinator Beth Weizman speaking events

Milestone Places of the City of Melbourne
“Meyer Eidelson has written more than 14 books and published a number of others dealing with the natural, cultural and social history of Melbourne. He is the founder of Melbourne Walks, which hosts walking tours to impart social and historical knowledge. Meyer will discuss the life of the Melbourne CBD from its indigenous origins, early settlement, boom and bust to a now thriving modern centre of art, architecture and culture.”  Carnegie Library public talk: