EXPLORE the early Melbourne township known as  ‘Bearbrass’  or ‘Batmania’. This includes the sites of settlers’ homes, Batman Hill, gaols, pub, church, docks, woolstore, warehouses, auction house, market, customs, newspaper office, Melbourne Club, Yarra Yarra falls, Aboriginal camp and others.
LEARN about the founding settlers, their challenges, and the events that led to a settlement in defiance of British law.
VIEW dozens of paintings, maps and documents by by early settlers and  artists eg, historic pictures, timelines,
DISCOVER the impact of settlement on the Aboriginal people of the Kulin Nation.

WHEN: Tours are normally 2.5 hours by arrangement at a time of your convenience.

SCHOOLS: See our SCHOOLS TOUR OF EARLY OR COLONIAL MELBOURNE

I just wanted to thank you for the marvellous walking tour for our group. It was an incredibly interesting morning, and very much appreciated.  As I’ve been telling people about it, what struck me was your detailed knowledge of early Melbourne history, the maps and photos you showed us, the Batman pole that will soon be a thing of the past, your insight into the Aboriginal community, the former waterfall which marked the Yarra River crossing and freshwater mark, the idea of the young Tasmanian girl about to give birth to the first European child in Melbourne, and the artifacts that we examined at the Rialto.
Mary Jo and friends

Amazing! I thought I knew Melbourne but I was wrong. Under our noses is the whole village.  Christine.

On 11-12 March 2012, 160 of the 4500 descendants of the Solomons convened in Melbourne. Many attended our Bearbrass Tour to celebrate their reunion. The Solomons have an extraordinary history. A Solomon was an early settler with John Batman, another the fire chief at Broken Hill, four fought at Gallipoli, one went down on the Titanic, one was Premier of South Australia, another helped write the Australian Constitution. See Age article

We pursue the political, social, and economic reasons that created this village on First Nation land in defiance of British law. Learn how Melbourne began and who were the personalities that shaped it. Discover the characters living in what was once a muddy, stump-infested collection of shanties. grog houses, shepherds, and gentrified speculators.  Pioneer ancestors of Melbourne regularly come on the Bearbrass tour to experience the resurrection of Old Melbourne Town in 1835. 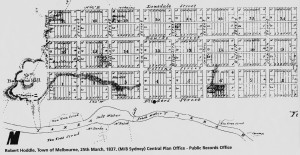 We encounter John Batman and John Fawkner on route, the original larrikin and wowser,  explore their opposed characters and the contentious question of who was the original European founder of the city. Or was it Charles Evans and Captain Lancey?  We peruse and debate the original treaty. We also examine the impact of settlement on the Boon Wurrung and Wurundjeri people of the Kulin Nation.

And why is it called Bearbrass anyway?

Some of the places we go.  We start either at the Melbourne Aquarium or Southern Cross Station.